The Gross and Creepy Story of Lot 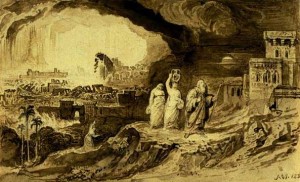 This will be the first installment in a series called “Creepy Bible Stories.” The story of Lot and of “Sodom and Gomorrah” begins a full 18 chapters into the bible, so I’m skipping over quite a bit of creepiness just to get to it first. Given that it is probably the story most often mentioned when ignorant homophobes want to denigrate gays, I thought I would jump in with some facts.

Turn with me, if you will, to Genesis Chapter 18.

Towards the end of this chapter, we see Abraham arguing with God over a city called Sodom. Sodom apparently is a very, very naughty city (what with sodomy being named after it and all). As the Old Testament God is frequently given to temper tantrums and fits of violent, destructive rage (see an earlier story about a man and an ark), he really wants to fire-bomb Sodom. Abraham, voicing the sentiment felt by any sane reader of the bible, asks God why he would destroy the good with the wicked.

Genesis 18:23 “Then Abraham approached him and said: “Will you sweep away the righteous with the wicked?”

God and Abraham then get into a really bizarre negotiation over just how many righteous people would have to be in the city of Sodom before God decided not to violently destroy it. They finally agree that—should there be at least 10 good people in Sodom—God would leave things be. This, in Old Testament terms, is quite reasonable.

So then we have Genesis Chapter 19, which tells the rest of this really messed up story. God, inexplicably, has had to send down two angels to investigate the level of naughtiness in the town. He sends them to stay with the righteous Lot, who is Abraham’s nephew. [If you find it confusing as to why an allegedly omniscient God would need to send angels down to investigate anything, you are not alone. I am confused by this as well]. After the angels have arrived, the men of the city surround the house. They demand that Lot send the angels out so the men can rape them.

Genesis 19:4-5 “4 Before they had gone to bed, all the men from every part of the city of Sodom —both young and old—surrounded the house. 5 They called to Lot, “Where are the men who came to you tonight? Bring them out to us so that we can have sex with them.”

Okay. Granted. That is pretty awful. I’m sure most people could agree that rapists deserve to be fire-bombed, right? But wouldn’t it also be considered pretty awful for a father to throw his young virgin daughters into a mob of rapists? Yes. That would be awful as well. But guess what Lot offers to do?

Genesis 19:6-8 “6 Lot went outside to meet them and shut the door behind him 7 and said, “No, my friends. Don’t do this wicked thing. 8 Look, I have two daughters who have never slept with a man. Let me bring them out to you, and you can do what you like with them. But don’t do anything to these men, for they have come under the protection of my roof.”

Okay, now that is really, really messed up. Mobs of rapists are one level of evil. A father who would throw out his own daughters to those rapists represents a whole different, deeper level of evil. Sorry, but Lot is kind of a dick.

So anyway, the angels then strike the mob of rapists blind—just in the nick of time. [When reading this pleasant tale, you may be wondering why the angels didn’t do this before Lot tried to soothe the mob with his young daughters. That is a reasonable thing to wonder.] The angels then warn Lot that he and his family need to skedaddle, and not to look back. The “not looking back” thing is kind of important later on in the story.

Genesis 19:17 “17 As soon as they had brought them out, one of them said, “Flee for your lives! Don’t look back, and don’t stop anywhere in the plain! Flee to the mountains or you will be swept away!”

Lot, his wife, and his two daughters flee the city, and then the fire-bombing begins. That mob of rapists sure gets a comeuppance, though it is not clear what the women and children of the city did to deserve being burned alive. Or was it a city only composed of men who were rape-y? This is all left a bit vague. As they are fleeing, however, Lot’s wife commits the heinous crime of pivoting her head slightly, and is instantly turned into a pillar of salt.

“Wait, what?” you may ask. “That sounds weird,” you may say. No, it really happened:

So, to summarize, God has destroyed two cities which allegedly were full of male rapists only. The only man considered righteous enough to escape is also willing to throw his daughters to said rapists. Yet, the man’s wife is turned into a condiment just for looking back on what was surely a great display of fireworks?

Yes, that is all accurate. But wait, the creepiest bit of this tale is yet to come. In fact, rather than summarize, I will quote the rest of the story verbatim. I don’t want there to be any accusation that I am making stuff up or quoting out of context:

Genesis 19:30-38 “30 Lot and his two daughters left Zoar and settled in the mountains, for he was afraid to stay in Zoar. He and his two daughters lived in a cave. 31 One day the older daughter said to the younger, “Our father is old, and there is no man around here to give us children—as is the custom all over the earth. 32 Let’s get our father to drink wine and then sleep with him and preserve our family line through our father.”

33 That night they got their father to drink wine, and the older daughter went in and slept with him. He was not aware of it when she lay down or when she got up.

34 The next day the older daughter said to the younger, “Last night I slept with my father. Let’s get him to drink wine again tonight, and you go in and sleep with him so we can preserve our family line through our father.” 35 So they got their father to drink wine that night also, and the younger daughter went in and slept with him. Again he was not aware of it when she lay down or when she got up.

Please spare me the “they thought they were the only people on the planet and had to do it to repopulate the species” excuse. First of all, it would still be creepy even if that was the case (see the very first creepy bible story about Adam/Eve and their children), which it isn’t. Lot’s family is well aware that there is a town nearby. Lot asks God specifically to spare the town so his family can flee there.

Genesis 19:20-23 “20 Look, here is a town near enough to run to, and it is small. Let me flee to it—it is very small, isn’t it? Then my life will be spared.21 He said to him, “Very well, I will grant this request too; I will not overthrow the town you speak of. 22 But flee there quickly, because I cannot do anything until you reach it.” (That is why the town was called Zoar. 23 By the time Lot reached Zoar, the sun had risen over the land.”

My hope is that—someday—religious fundamentalists will actually read the passages they choose to parrot so often. If these passages “clearly” show that homosexuality is immoral, then they also clearly show that a father using his own daughters as bait for a mob of rapists and then later getting them pregnant is okey-dokey. Is that really the message to be learned here? Incest? OK. Rape? OK, as long as it isn’t gay rape.

10 comments on “The Gross and Creepy Story of Lot”