Given the weather had been warmer last week (up into the 50s!), and my partner had just come home after an extended absence, we decided to get out and explore Trier, Germany a bit. It is less than an hour away by train, and–being the oldest city in Germany–is home to a lot of interesting architecture and Roman ruins. On a more shallow note, we both wanted to see the new Oz movie, which was playing there (Luxembourg City theaters didn’t start showing it until today, and I can be impatient sometimes). Though there were a couple of hiccups in our plan (the weather turned out to be considerably colder than we had expected and the movie was actually dubbed in German rather than just subtitled), we still had an enjoyable time. Even in freezing temperatures, it is nice to get out of the house and escape somewhere now and then.

The walk from the train station to city center was relatively short and pleasant (weather not withstanding), and–as with many other locations we’ve visited recently–we were easily able to imagine how amazing it will all be when Spring finally comes (though it does not appear it will come this week, as it is snowing again). A small park divided the road on the way to downtown, and beautiful homes and businesses lined the street. 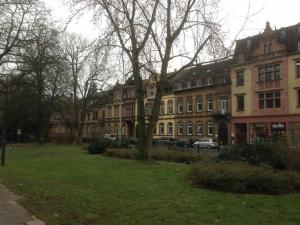 The passage across the street into city center was bordered by the Porta Nigra, which is a Roman city gate built around 200 AD. It is possible to climb inside of it and explore, but there was some kind of demonstration going on and we didn’t get to do so. We will definitely return for that another day. 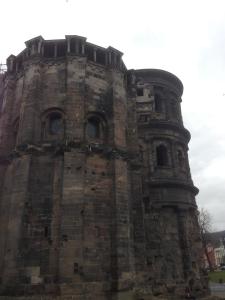 We did some browsing in the open air market in city center, had some lunch, and enjoyed some punsch (a German hot wine drink similar to Gluhwein, but with white wine instead of red).

Before accepting the fact that the temperature was rapidly declining back into the 30s and that it was starting to rain, we did some more walking and found the Cathedral of Trier. This is the oldest cathedral in Germany. The original structure dates back to the 4th Century, with a major part of the facade completed in 1196.

We wanted to see the Palace of Trier as well as the ruins of the Roman baths, but decided–given the weather–it would be best saved for another time. Here are some more shots of the beautiful architecture around the city.

There will be more in-depth exploration next time, but it was a nice afternoon getaway nonetheless!