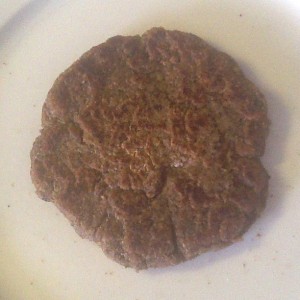 I made blackeyed peas as a side dish last night, and had plenty left over, so I wanted to conduct another cooking experiment. Admittedly, many homemade veggie burgers often end up too mushy and fall apart, or they’re entirely flavorless. Or possibly both. My other problem with vegetarian cooking is that vegetarians and vegans often resort to unhealthy, processed fake meat products that are hardly much healthier than their meat equivalents (I’ll save my rant against seitan for another day). Aside from Morningstar Farms (or other similar products) being quite expensive and contributing to the myth that “healthy eating is beyond my budget,” they are not made from whole ingredients.

This affordable recipe actually forms decent patties that crisp up well, and are quite flavorful. They are also made from scratch from just a handful of whole ingredients you can actually pronounce. Mushrooms are loaded with B and D vitamins (naturally occurring, unlike dairy), and also come packed with antioxidants. Blackeyed peas are loaded with fiber, potassium, iron, and protein. So give them a try! 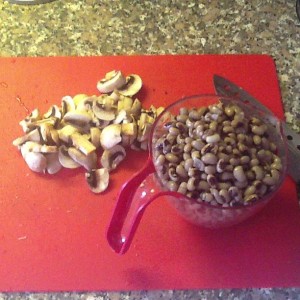 INGREDIENTS: The seasoning for this can vary greatly according to your personal tastes, but the blackeyed peas and mushrooms part needs to remain constant. I have seen several recipes online which include fresh herbs. While adding cilantro, parsley, basil, etc. can add a nice, fresh, flavor, I’ve found including them can prevent the patties from holding together well. So save the herbs for your burger toppings!

2 cups cooked blackeyed peas (I cook dried beans from scratch because it is much cheaper and also much healthier, as the preservatives and sodium in canned foods leach out nutrients, but canned will be fine for this recipe as long as you rinse them first).

1 shallot, minced (or half of a small yellow onion)

3 cloves garlic, minced (or an entire bulb if you’re a garlic freak like me)

1/2 cup of whole wheat flour for the patties themselves, and another 1/4 cup set aside

2 tbsp soy sauce or Braggs (if you have access to Maggi Wurze, that is acceptable as well)

1 tbsp Sriracha or Tabasco (leave it out if you’re a wimp about a little spice, but–as this is 1 tbsp for about 8 patties, it hardly adds heat). It adds flavor. 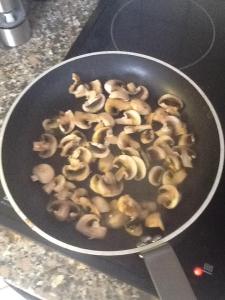 *For the mushrooms, make sure they are dry, unsalted, and that the pan is at medium high heat. You also need to cook them in two batches. This is important for allowing the mushrooms to brown instead of steam. If they steam, they will give up a lot of liquid and make the patties mushier and harder to deal with. Adding salt at this point will also draw moisture from the mushrooms and make it watery, so don’t add salt either. So…heat a skillet over medium high heat, and cook the mushrooms in 2 batches in 1/2 tbsp of oil until browned. 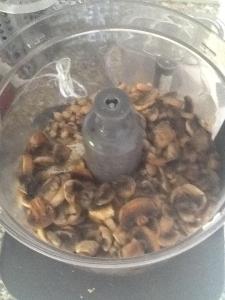 *Throw everything (except the oil) into a food processor and pulse 4-5 times until roughly mixed. You can pulse it a few more times if it doesn’t look well mixed, but be careful not to overdo it. Overmixing will lead back to the overly-mushy burger and you will have to add too much flour, which adds unecessary carb calories and will contribute a raw flour taste. It is probably even better to manually mash all this with a fork, in which case you can cut the flour in half. But I was lazy today. Sue me. Adjust the salt and/or seasonings at this point according to taste.

*Heat the skillet back up to medium high heat, form 8 patties about 1/2 inch thick, and lightly coat them with flour (this will help them brown and give it that burger-like look). Cook the patties 2 at a time in a tbsp of oil, 2-3 minutes on each side. Most skillets will hold 4 patties, but these are more delicate than ground beef and you need more space. So be patient and do them just two at a time. And be sure the pan is hot before laying the patties in the pan!

*Create your own burger with the patty, however you like. Enjoy!