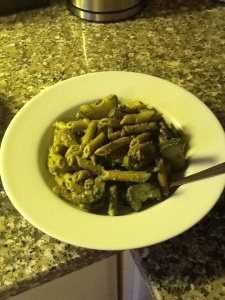 It is usually fairly easy to get people to eat something vegan if white pasta is involved, and this dish is no exception. This can be made even healthier with whole wheat pasta, but there is nothing wrong with indulging once in a while. So go nuts and eat some white pasta, okay? This is delicious enough that you may not miss the parmesan cheese, so give it a try without. If you think it tastes like feet, you can add some later, okay?

2-3 cloves of garlic, roughly chopped (I like to sautee it first, as raw garlic isn’t very pleasant.)

1/4 cup nutritional yeast (NOT bread yeast or brewers yeast, which is entirely different and will taste nasty.)

1/4 cup roasted pine nuts (Just heat them in a dry pan on medium high for 2-3 minutes. Watch closely, as it doesn’t take long.)

*Put it all in a food processor and puree to a smooth paste. It should look like this: 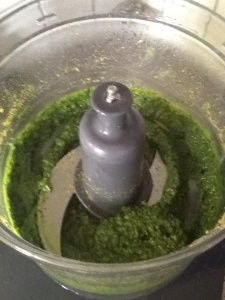 FOR THE REST OF IT:

1 shallot or half a yellow onion

8 oz of mushrooms, thinly sliced (The container at the grocery store is usually 8 oz.)

*Start the pasta water in a large pot, adding pasta when it boils (did you need me to tell you that?).

*Heat half the oil over medium high heat in a medium skillet.

*Sautee the onlions until browned, then set aside.

*Heat the rest of the oil and sautee the mushrooms. Set them aside as well.

*Repeat with the zucchini.

*It is important that you cook these three things separately, so they’ll brown and not just steam. Browning adds a deeper, more complex flavor. Steaming is fine, but it will be mushy and taste more bland.

*When the pasta is done, drain, and–in a large bowl–toss with the vegan pesto and all the sauteed veggies.

*You can also add some red pepper flakes if you’re feeling naughty.