The week prior to Halloween, my partner and I discovered there is an amusement park outside of Brussels called Walibi. The park was having a Halloween celebration, complete with zombies and “haunted” houses. We are both roller coaster fanatics; he has an appreciation for zombies and all things Halloween, so we couldn’t resist. It was also another excuse to get out and see more of Belgium. As an added bonus, half of a couple we have befriended here used to live in Brussels. They agreed not only to accompany us and show us around the city, but to drive as well. This trip was fairly impromptu, and–as a result–our goal was to have more of a relaxed exploration of the city. And also to drink beer. 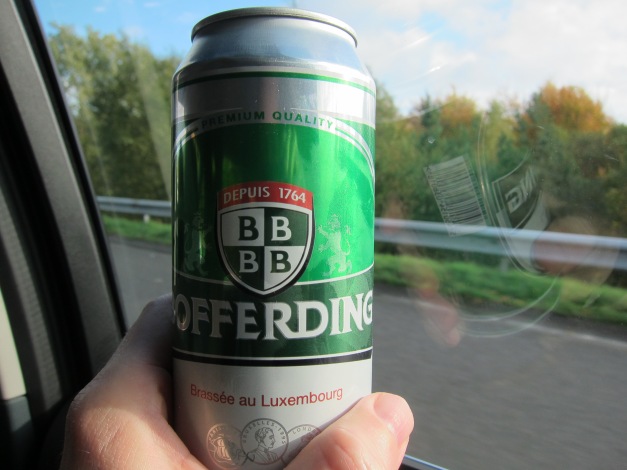 Let me state, first of all, that I am in no way condoning any kind of drinking and driving. It is horrible and ruins lives and all that. But before you get too judgey, remember that open containers are perfectly legal in many parts of Europe. More importantly, the driver of the car was not drinking. I wouldn’t have been a passenger if he had been. So don’t get all Angry-Oprah-MADD on me. We wanted to get into the spirit of the beer/Belgium weekend with a can for the road. The only problem here is 1) Bofferding is actually a Luxembourgish beer and 2) It is essentially the European equivalent of Coors and tastes like warm cow piss squeezed through a dirty sock. But it was all we found at the roadside restaurant where we pulled off to pee (they don’t really have convenience stores off the freeway here). In any case, each of us only had one. We are all adults and knew it is probably not a good idea to get overly tipsy when about to board thrill rides. Moving on…

You know what’s fun? Roller coasters and zombies. I have never been really into Halloween or costumes, and have always preferred science fiction to horror, but this was a lot of fun. Possibly beer helped, but so what? I would suggest anyone trying this temper their beer consumption somewhat. Anything more than a reasonably tipsy state may result in unhappiness for other park patrons (and by that, I mean people getting vomit on them while whooshing through what should be a fun ride). But if you can be a grown-up, responsible kind of drunk, you should definitely try it in an amusement park where they have something called a “Zombie Bar.” Then, you should walk through  a few Haunted Houses and ride some rides in the dark. Halloween fun to be had by all.

Though a bit exhausted from the amusement park, we still managed to do some exploring of Brussels at night. By “exploring” I mean walking to the Thai restaurant where we planned to eat. There were some great views of the city from our vantage point, and Grand Place looks really cool lit up at night. I had not had the opportunity to see that before, so I’m glad our guide took us on a bit of a winding tour on the way to dinner.

The Palais de Justice (Palace of Justice) was our first destination between breakfast and Grand Place the next morning. By European standards, it isn’t very old (built between 1866 and 1883), but it is still an interesting piece of architecture. It is claimed to be the largest structure built during the 19th Century, and is even larger than St. Peters Basilica in Rome. The outer portions of the building are open to the public and free of charge, but unfortunately that also means that homeless and various miscreant youth are able to use it as a toilet and a place for sex. It is a beautiful structure juxtaposed with ugly graffiti and the stench of urine, not unlike what one might expect if they were to get too close to David Beckham. But I digress.

We spent the rest of the day with no destination in mind, which was enjoyable even in spite of the wind and rain that had come seemingly from nowhere (though we felt lucky that the previous day at the park had been fairly warm and sunny). Strolling through The Saint-Hubertus Gallery took up a good chunk of our time, and was well worth it. This is a luxury shopping experience for tourists and locals alike, with all sorts of clothing, jewelry, food, and confection boutiques. If you are looking for good Belgian chocolate, this is where to find it. Several stores cater to the sweet tooth.

We drank some more beer at Delirium Cafe, which at one point was in the Guinness Book for most extensive beer list. There are multiple floors, with a different selection on each. They also serve food, but who gives a fuck about that? We wanted beer. Food just soaks that up. Anyway, the beer list here is longer than anything I’ve ever seen. Definitely put it on your beer tour list.

As a bonus, the Jeanneke Pis statue is right across the street from the bar. This is a much newer companion (installed in the 1980s) to the more well-known Manneken Pis, which was originally erected around 1618. Both are symbols of rebellious spirit. Also, statues of people peeing are funny–especially when they are dressed up in little outfits (they do this as well, as you can see in the link).

I could describe more of the things we saw, but I prefer to leave on a high note.